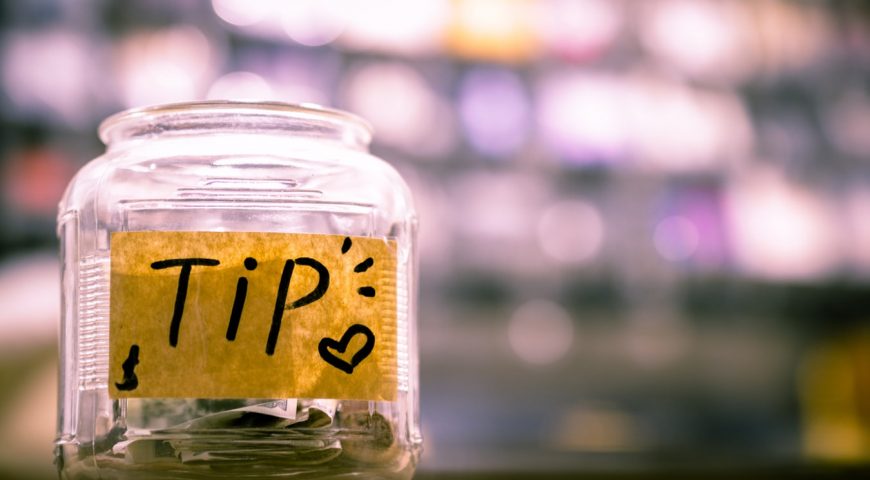 Tipping can get tricky when traveling outside of your social or geographical bubble. The Japanese, for example, don’t accept tips and get very uncomfortable, sometimes offended, about the whole business. North Americans are typically known for being generous tippers, for close to any service provided, no matter what, whereas in Iceland it simply doesn’t exist. Even within Latin America, tipping etiquette ranges from country to country. So when traveling throughout Argentina, how do you know what is considered appropriate? How much is too much of a tip at a restaurant in Buenos Aires? How much is enough for an airport taxi driver?

We have outlined almost everything you need to know about tipping in Argentina, including who, when, why, and how much.

In restaurants, 10% gratuity is considered the norm. Going over 10% is rare and pretty generous. Leaving less (or leaving nothing)if the service was particularly bad, is also quite common. At fine-dining restaurants, where you are almost guaranteed to receive great attention, there should be no reason not to tip. Large parties or big groups of people (8+) will usually leave a little extra, but beyond that, 10% is a pretty golden standard.

In some instances, restaurants will charge a cubierto which is a “cutlery” charge anywhere from $10-50 pesos – a clever way of charging something for nothing. Not to be confused with a “service charge,” the cubierto money goes directly to the restaurant and is not part of the tip nor does it go to the waitstaff. Nicer restaurants will use the cubierto charge for bread, sauces and simple appetizers they serve pre-meal.

Restaurants do NOT have a “tip” section on credit card receipts so, if you are planning on paying for the meal with plastic, be sure to bring cash to pay the tip separately. 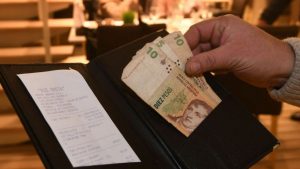 When paying for the bill or tipping in a restaurant, be sure not to leave the large amounts of money on the table and walk away, especially if you are dining outside. It is quite possible that it will be snagged by someone other than your server.

Tipping in Buenos Aires bars is becoming more common. Don’t worry, you won’t be snubbed or ignored for the rest of the night or have something fishy floating in your vodka tonic if you don’t tip, but bartenders will appreciate it. The barkeeps will give you exact change, down to the dime, and don’t necessarily want your coins scattered on their bar. If you want to leave a tip there is usually a jar available. Again, try not to leave money lying around hoping the bartender will see it – more likely sticky fingers will find it first. Better to put it directly into his or her hand.

If you are drinking high-end specialty cocktails that require some serious panache or know-how, tipping is appreciated.

It is not necessary to tip cab drivers in Argentina, nor do they expect one. It is considered polite to round up to the nearest whole peso multiple of $5 (if it is $73 pesos, round up to $75), so they don’t have to count out coins for your change (which they almost never have anyway). Sometimes, they will even round down and give you back the difference.

Some of the shadier cab drivers, however, if you hand them a larger bill will mumble something about a “baggage fee” and try to hang on to your extra few pesos. It is ok to be adamant about demanding your change in these instances. You can be sure any Argentine would.

If the cab driver helps load or unload your baggage from the curb, it is nice to give them something in gratitude. Also, remis and private rental cars are usually very clean, prompt, and professional and given a 10% gratuity roughly.

If you go on a tour with a professional guide, who is most likely bilingual or possibly even trilingual and very knowledgeable about the subject, it is common to give them somewhere around 10-20% of the tour price. But again, only if you had a good experience and feel it is warranted.

“Free” tours you should be giving around $200-300 pesos per person for a 3-4 hour tour. USD are very much appreciated though

Car attendants, or trapitos, are the guys anywhere from 14 years old to guys with walkers who will pop up when you are trying to parallel park, tell you how much room you have between bumpers, direct you into the spot, maybe wipe off your headlights, etc. They will then “watch” your car for you while you eat dinner, see a tango show, or go to a concert, promising to wait there until you return. Usually, they are nowhere to be found by the time you get back, but your car will (hopefully) be in good condition. If you blow them off, your car could be unrecognizable when you return (any colorful combination of dents, scratches, a cracked windshield, etc.). They can charge $20-$30 pesos in neighborhoods like Villa Crespo or Congreso and sometimes $50-$100+ pesos in Palermo Soho or Las Canitas to park on “their” block. At some of the big event venues, it can be upwards of $200 pesos+. Not that they have done anything to deserve it, but it is wise to tip these guys, even if it’s not much. You can, of course, decline but it is not recommended to argue. A “half now” and “half later” approach seems to work, especially when you come back and they are no longer around. Many insist upon paying all upon their exit.

If you decide to dine in, you should be aware that tipping the delivery guy is beginning to become more common. Some restaurants have adopted a “delivery fee” for ordering by phone (somewhere around twenty pesos) but the tip itself is separate. 5-10% can be a good rule of thumb.

If you go to the grocery store and make a large purchase, typically you will have the groceries sent directly “a domicilio” (to your house). If you do, remember to give the delivery man something after he helps unload everything.